News coming in from South Africa shows that Shepherd Huxley Bushiri and his wife Mary through their Shepherd Bushiri Investments have a debt of over K10 Billion which creditors are looking to recover since they fled South Africa while facing money laundering and fraud charges. 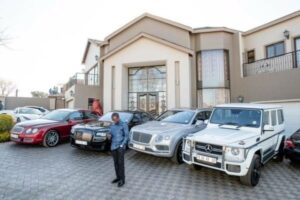 Bushiri in front of his luxury cars and Mansion

Court records show that Bushiri and his wife on March 23 2020 consented to an order that they were jointly and severally liable to the amount of over R200-million with interest payable to JM Busha, an investment and asset management company which is looking to freeze Bushiri’s assets in the United States of America, England and Dubai.

Busha’s claims against Bushiri and his Investment Company arose after Busha invested nearly R200-million of various workers pension funds into Shepherd Bushiri Investments (SBI), which operates a chain of hotels in Africa and Europe. Part of the money was used to construct the Sparkling Waters Hotel and Spa near Rustenburg with promises of a 40% annual return on investments but the business had fallen into arrears.

Bushiri had promised to pay the full amount in terms of the court order on or before November 16 but fled South Africa on 13 November without settling his outstanding debt.

“I accordingly believe that at the time of my conversation on November 9 2020, the respondent was well aware of his intention to flee the Republic of South Africa, prior to the promised date of payment to the applicant.

“I, therefore, submit that the respondent has committed an act of insolvency in terms of section 8[a] of the act,” read the court papers.

Bushiri’s accounts and assets were frozen by the South African State following his initial arrest in February 2019 for a separate money laundering case of R15,000,000.