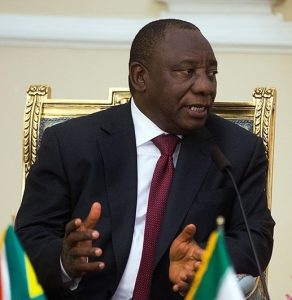 South African’s have expressed mixed reactions to the new Cabinet unveiled by new President Cyril Ramaphosa. According to SABC News, Ramaphosa’s cabinet reshuffle has seen the expulsion of 10 ministers recruited by his predecessor, Jacob Zuma, including four cabinet ministers alleged to be involved in the infamous State Capture which has seen the Gupta family flee South Africa along with Zuma’s son, Duduzane.

The new cabinet comprises a few new and old faces, including: David Mabuza as the vice President; long-time rival Nkosazana Dlamini-Zuma as Presidential Minister responsible for Planning, Monitoring and Evaluation; and Nhlanlha Nene reprising his role as the Finance Minister, two years after he was sacked by Jacob Zuma, according to www.enca.com.

“In making these changes, I have been conscious of the need to balance continuity and stability with the need for renewal, economic recovery and accelerated transformation,” Ramaphosa said as he announced his cabinet in Pretoria, the Capital City of South Africa.

Meanwhile, this has sparked mixed reviews across the South African political divide, with some analysts welcoming the reshuffle while opposition Democratic Alliance (DA) described Mabuza’s inclusion as deputy president “a fatal compromise”.

“Ramaphosa’s new Cabinet will serve the ANC, not South Africa. His decision to side with scandal-ridden Mabuza undermines the integrity of his commitment to fight corruption and rebuild the nation from the tatters of the Zuma decade,” DA leader Mmusi Maimane told Mail and Guardian newspaper.

Ramaphosa’s new-look Cabinet has been perceived by some quarters as a strategic attempt to unify the ruling African National Congress (ANC), as the newly-elected President seeks to root out corruption and revamp South Africa’s ailing economy.