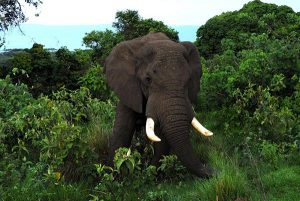 The Ntchisi Magistrate Court last week convicted and sentenced Medson Songazaudzu to five years imprisonment with hard labour for killing an elephant. Gladstone Mthawanji and James Mtsiro both from the same district were also sentenced to 18 months with hard labour by the same court for illegal possession of ivory. The Police submitted to the court that Songazaudzu committed the offence on September 6 2017 at Nkhotakota Game Reserve. He was only arrested two days later following a tip from informers.

Songazaudzu who pleaded guilty to three charges of being found in possession of  a firearm, entering into a protected area without permission and killing of protected species then later sold the ivory to Mthawanji and Mtsiro according to the Police. “The two bought the ivory which weighed 4 Kilogrammes and were arrested on September 15, this year as they were offering it for sale near the boma,” said Gladson M’bumpha (Police PRO).

Passing the sentence, First Grade Magistrate Dorothy Kalua described the offences as serious hence imposing the jail terms to deter other would be offenders.