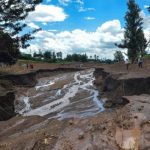 Nakuru Province governor Lee Kinyanjui told Reuters on Wednesday that county and national governments were still assessing the damage to ascertain how much damage the broken dam had caused.

“The water has caused huge destruction of both life and property. The extent of the damage has yet to be ascertained,” said Kinyaunji.

Water Resources Management Authority (Warma) spokesman Elizabeth Luvonga  said the dams on Patel’s sprawling farm lacked the necessary permissions making them illegal. The farms manager however denied the accusations saying the dams had been constructed over 15 years ago.