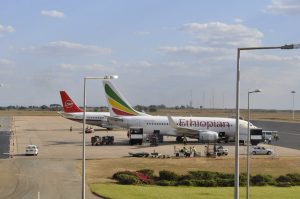 The Ministry of Transport and Public Works has confirmed that work to expand Kamuzu International Airport (KIA) have stalled after disagreements arose between the contractor, Marubeni Protechs and its sub contractor, Terrastone Construction Limited. Following the fall-out, Terrastone removed its heavy construction equipment from the site.

The project which was funded by the Japanese Government to the tune of US$31 millon started in March 2017 and is set to include the construction of a new arrivals and departure wing as well as a domestic terminal.

KIA is Malawi’s biggest airport located in the Capital city of Lilongwe. The airport is in need of major rehabilitation works and improvements which have been very few over its 35 year history. The same can be said of Chileka Airport whose construction and rehabilitation has taken seemingly forever.