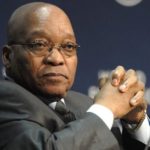 Former South African President and Freedom fighter Jacob Zuma has handed himself over to police in KwaZulu-Natal Province as he starts to serve a 15 month jail term for contempt of court.

Zuma was given a Wednesday deadline by the authorities to hand himself over after he had refused to attend a corruption inquiry to give evidence into corruption while he was still President of the Republic of South Africa.

Mr Zuma left his Nkandla property where his supporters were holding a vigil to block any attempt to arrest him just before midnight in a speeding convoy amidst heavy police presence. Mr Zuma he had initially said he was just being victimized as part of a political conspiracy and said that sending him to jail during the height of the pandemic at his age was similar to a death sentence.

Mr Zuma is currently being held near his home at the Estcourt Correctional Center. His detention may be short lived however as his lawyers aim to put forward arguments to aid his current situation.

Mr Zuma’s daughter, Dudu Zuma-Sambudla, said her father was still in high spirits saying that Mr Zuma hoped he would still get his overalls from the time he was arrested on Robben Island together with Nelson Mandela and other anti-apartheid heroes.

6 thoughts on “Jacob Zuma hands himself over to Police”