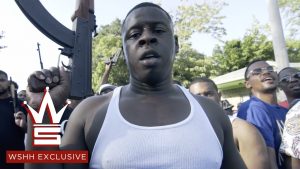 Memphis rapper, Blac Youngsta aka Sammie Benson has turned himself in to police custody after the Charlotte-Mecklenburg Police Department issued a warrant for his arrest stemming from a February 2017 shooting in Charlotte, North Carolina.

The shooting occured around the time Young Dolph released a diss track “Play Wit Yo B*tch” aimed at fellow Memphis Rapper, Yo Gotti of Cocaine Music Group (CMG). It seems this did not go down well with Blac Youngsta and affiliates after Young Dolph alleged to have slept with Yo Gotti’s “Ho Gotti Baby Mama”, and featured artwork showing 24 missed calls on Dolph’s phone from Yo Gotti’s main bae.

During the shooting the incident, a hundred shots were fired at Young Dolph’s vehicle and surrounding apartment buildings with no major casaulties owing mainly to Dolph’s enhanced bulletproof SUV.

Police investigations led them to discover that the van used to carry out the shooting had been rented by Blac Youngsta who admits to hiring the van but claims that the van had been stolen from him during the time of the shooting.

Two other men connected to Blac Youngsta have also been arrested in connection with the Young Dolph shooting. Yo Gotti who recently signed to Jay Z’s Roc Nation imprint has yet to comment on the recent developments surrounding his affiliate.