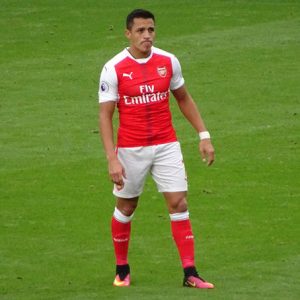 Arsenal F.C star forward Alexis Sanchez has agreed a lucrative four-and-a-half year deal with Jose Mourinho’s Manchester Utd in the region of £14 million after tax deductions. The transfer deal depends on United midfielder Henrikh Mkhitaryan agreeing terms with Arsenal in what could be the seasons biggest swap transfer deal.

While Pep Guardiola’s side were seen as the front runners to land the Chilean International’s signature, Manchester City were simply not prepared to pay too much money for Sanchez whose Arsenal contract runs out in 6 months.

If Mkhitaryan does not agree terms with Arsenal, Jose Mourinho may still remain hopeful that Utd’s financial muscle may still get him the player he wants especially if Ed Woodward is convinced.

Sources close to the Old Trafford manager say that Mourinho believes Sanchez will bring the much needed improvement to his side who are behind league leaders Manchester City.