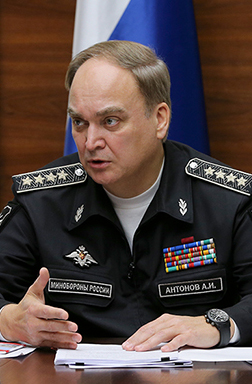 Russia and Iran have warned the United States led coalition of consequences following their air missile strikes on Syria’s alleged chemical weapons plants. Russian Ambassador to the U.S, Anatoly Antonov said Moscow would implement a predetermined response to Friday’s attack, adding that the U.S has no moral right to blame other countries.

He took to Twitter to say, “A pre-designed scenario is being implemented. Again, we are being threatened. We warned that such actions will not be left without consequences. All responsibility for them rests with Washington, London and Paris.” Al Jazeera also quoted Iran’s Foreign Ministry as having said the U.S led coalition would face some regional consequences for taking pre-emptive action against Syria without awaiting findings from the Organisation for the Prohibition of Chemical Weapons (OPCW) over the alleged Syrian chemical attack.

Meanwhile, Algeria became the first African country to openly condemn the U.S, France and Britain for carrying out the strikes against Syria. Algerian Prime Minister Ahmed Ouyahia told Reuters that it was necessary for the Western allies to wait for the outcome of the OPCW probe before taking any steps.

Some members of the U.S Congress have also criticised U.S President Donald Trump’s decision to authorise an attack on a foreign State before obtaining Congressional support. “This military action against Syria is a strike against a foreign government. Such an act requires a Congressional authorization to use force, and we have not provided one,” Republican Senator John Garamendi posted on social media.