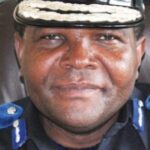 George Kainja the newly appointed Inspector General of the Malawi Police Service (MPS) has promised the country that under his leadership, the MPS will operate professionally and without political influence in carrying out its duties.

“The President has appointed me as Inspector General of the Malawi Police Service, which is a constitutional organ. When I was appointed, the expectation was that I will be IG for an organisation that is independent and that I must be independent in my duties,” said Kainja.

Kainja also pledged to conclude the Issa Njaunju and Robert Chasowa murders. Njauju an official from the Anti-Corruption Bureau was murdered in 2016 in Lilongwe and his car was found burnt to ashes while Chasowa, a student activist, was murdered in 2011.

One of Kainja’s biggest arrest so far is that of Norman Chisale, the security aide of former President Peter Mutharika. Chisale was arrested on fraud and money laundering charges following Police investigations into the illegal duty-free importation of cement worth K5bn using Mutharika’s Tax ID.

Chisale was fingered in the whole affair by an Asian businessman named Ahmed Chunara of Prestige Import and Export who claims to have made payments through Norman Chisale and others to import cheaply cement from Zambia and Zimbabwe.

Despite his involvement as an accomplice in the cement scandal, Ahmed Chunara has not been arrested with anonymous sources saying orders from above were that he should be let go after questioning.

Roza Mbilizi the Malawi Revenue Authority Deputy Commissioner was also arrested and questioned by the Police in connection with the same scandal.