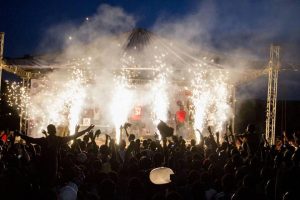 Fireworks during Fredokiss’ show in Mzuzu

The much touted Ghetto King Kong Concert at Mzuzu Stadium organized by Ghetto Gutter Entertainment which was headlined by Fredokiss was a huge success as thousands of music fans entered the stadium to have a feel of the Ghetto King Kong’s stage magic.

The highlight of the show however was Fredokiss’ entrance to the stadium via a helicopter which landed inside the stadium to the amazement of concert attendees who strated chanting his name as he made his way to the stage under the protection of Ichocho Power Security who seemed to do a better job than the police who were hired for the event. 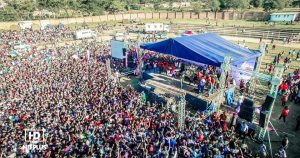 Fredokiss who is the brand ambassador for NBS Bank was welcomed on stage by NBS CCO Phil Madinga and NBS Head of Marketing Lorraine Phiri as “Kunditcha Fredo” blared through the array speakers from Mibawa. In his remarks, Madinga thanked all those who attended and opened NBS accounts at the stadium. He assured the mostly young crowd that NBS was the bank for them with its specially tailored products that cater to their needs.

The event was also spiced up with a raffle draw which saw two people walk away with three decoders and TV dishes courtesy of Kwese TV. Two other winners walked off with two s12 smartphones which were sponsored by Itel.